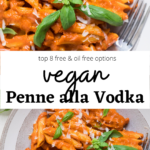 This vegan vodka sauce is the creamy tomato sauce of your dreams. Use it to make Vegan Penne alla vodka or for a variety of other things!

No we’re not getting drunk, but this vegan vodka sauce recipe is 100% going to be your new favorite pasta sauce to make for dinner.

Vodka sauce is an Italian inspired dish that comes from combining tomato sauce, herbs, vodka, and heavy cream. Obviously we’re vegan, so we can’t have it in any traditional sense; however, we are here to give you the best version of vegan vodka sauce, along with a vegan penne alla vodka recipe.

Usually when you combine cream with tomatoes, the acid reacts and separates the water from the ingredients. No one wants that and so Italians traditionally add wine to many dishes. However, along the way someone added vodka and this love child was born.

Vegan vodka sauce is traditionally use to make penne alla vodka, a pasta dish made using the sauce and penne pasta.

Okay enough history lesson! TL/DR: this sauce is so dang good and you need to try it.

How can I use vegan vodka sauce?

You’ve made this wonderful sauce and now you want to know how to use it.

Traditionally, vodka sauce is used to make penne alla vodka. Basically cooked penne pasta with the sauce, which is what you see in the photos we are sharing.

However, the sauce is so good, that we can surely find other ways to use it. Of course we can. Here’s some more ideas:

Can I add in vegan other ingredients if making vegan penne alla vodka?

Sometimes if ordering traditional penne alla vodka it may come with sausage, pancetta, or peas.

You can replace this with vegan versions of the sausage, maybe try slicing Field Roast sausages or vegan bacon that comes in a variety of ways.

Alternatively, you could also try adding in some vegan grilled chicken strips like the ones Gardein makes.

Do I have to add vodka to vegan vodka sauce?

Whether you don’t consume alcohol for personal or religious reasons, the short answer is yes, you can omit it.

The vodka gives a nice balance and helps with the emulsification; however, if needed it can be left out or replaced with another type of alcohol.

Obviously it’s worth noting that it will just be a tomato and cream based sauce at that point, but it will still be delicious.

Does the vodka cook out of vegan vodka sauce?

Alcohol cooking out of dishes quickly is quiet the myth. In fact, it takes almost 3 hours for no traces of alcohol to remain in most dishes.

A study from the U.S. Department of Agriculture’s Nutrient Data lab has stated that food simmered in alcohol for 15 minutes retains 40% of the alcohol and after 60 minutes, 25% of the alcohol remains.

This vegan vodka sauce that we are making, cooks down for about 30 minutes, so it would be lower than 40% but slightly higher than 25%

You could choose to go with a lower proof vodka to reduce the amount, but it’s important to note not to choose a cheap vodka as the taste of the overall dish will be effected.

It’s also important to note that it’s been shown that a larger cooking surface, helps burn off more alcohol as well. Meaning, that if you use a larger skillet to make this dish, that it should help in reducing by more alcohol content.

Is this safe to consume for children?

This question really comes down to your personal beliefs. There is alcohol remaining, but it comes out to be considerably less than 0.5oz per serving once cooked off, even using 100% proof vodka.

When you think about it, it’s not much different than using extracts in baking.

If you do not want your children to consume the dish, then you can make them a simple pasta with just tomato based sauce.

Can I prep this ahead?

Yes! This dish can be made and once cooled down stored in the refrigerator for up to a few days.

Reheating in a pan or in the microwave. Because the sauce thickens, you may want to add a splash of vodka (1 tsp), coconut milk, or water, to bring it together, but that’s not required.

Can I make this top 8 allergen free?

The ingredients that may contain Top 8 allergens include the pasta, coconut milk, and vegan parmesan cheese.

For the pasta, feel free to to swap with your favorite gluten free pasta.

For the coconut milk, you can try using a plain dairy free yogurt. See our vegan yogurt taste test to pick one if you don’t have a favorite. Depending on the yogurt that you choose, you may not need the sugar, so just taste it after adding.

Oat or soy milk are thicker than other plant based milks and so you could also use.

What is coconut milk/coconut cream? Carton or can?

When we are referring to coconut cream, this is the thick fatty part that rises to the top of canned coconut milk. Some brands it doesn’t matter if it’s chilled or room temperature, but for the best luck, we recommend chilling the can of coconut milk overnight.

What other vegan pasta dishes should I try?

Pasta is one of the best comfort foods.  It can easily be switched up with gluten free pasta! There are so many options today!

Some of our favorite vegan pasta dishes besides this are: 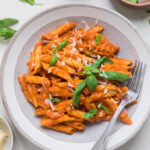