You are here: Home / Dessert / The Best Vegan Brownies

These are the best vegan brownies that you’ve ever made! Perfectly gooey with a crackle top and loaded with chocolate flavor all while easy to make!

There’s a lot of debate about what are the best brownies, but we are here to say that for at least us these are the best vegan brownies that we’ve had.

Some people like fluffy, more cake like brownies, but if you are looking for those, it’s not going to be here, we’re sorry.

To us, vegan brownies should be gooey and almost melt in your mouth when you bite into them. They do not crumble and they are loaded with intense chocolate flavor.

These a sweet, rich, and pure bliss of everything you could want in a vegan brownie recipe.

Whether you are a crispy edge person or a gooey center lover, you will be able to enjoy pieces from this recipe. Best of all, these are dairy free and egg free brownie without the compromise.

Below are notes about the ingredients before we get into the full recipe located lower in this post on how to make these vegan brownies recipe:

Below are notes about the ingredients before we get into the full recipe located lower in this post on how to make these vegan brownies recipe:

Tips for How To Make Vegan Brownies:

If you want the absolute best, fudgey vegan brownies, then you’ll want to follow these tips:

Can I make these Top 8 Allergen Free vegan brownies?

Yes! Use a gluten free flour instead of all-purpose. We like a 1:1 blend like Bob’s Red Mill or King Arthur the best.
Otherwise, you will want to make sure to use safe chocolate chips (like Enjoy Life) and a soy free vegan butter.

How long are these good for?

These amazing vegan brownies will last for 3-5 days if stored in an air tight container. They do not need to be refrigerated.

Can these easy vegan brownies be frozen?

Yes. These vegan brownies may be frozen. We recommend a freezer safe container and to consume within 3 months of first freezing them.

Can I double the recipe?

Yes, you can double this recipe if you need more and you have two separate baking dishes.

What are the best vegan chocolate chips?

We really love the Enjoy Life brand because they are free from so many allergens.
However, the Organic Top 8 Free chips from Wal-mart (Great Value brand) are accidentally vegan and they have a slightly better pricer point and still taste great.
You want to have a semisweet chocolate for vegan brownies that is at least 67% or less cocoa.

Can I reduce the sugar in vegan brownies?

You can either remove 1/2 cup of the cane sugar or remove all of the powdered sugar but do not do both options. You need to leave one.

How long should I wait before cutting vegan brownies?

You want your brownies to cool completely for the optimal texture. Ideally, this is going to take 2-3 hours before you can cut into them for the best texture from the outside edges to the center. However, if you want to speed up the process, you can refrigerate the brownies for 30 minutes once the pan is cool enough to touch.

What can I serve with vegan brownies?

So you made and love these vegan brownies (we know you snuck a piece), but you also need to know what to serve with it! Here’s some ideas: 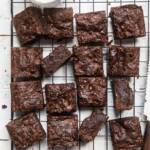 *Do not use a 9×9 pan as brownies will be thin and overcooked. *Ensure you measure your flour correctly **Nutritional facts are just estimates. Please utilize your own brand nutritional values to double check against our estimates. Does include walnuts but not ay optional add-ins.