These vegan eggnog Cinnamon Rolls bring the holidays to a new level! Make these to use up leftover vegan eggnog or just because you love eggnog!

Eggnog is a holiday must have, even if you are vegan and then vegan eggnog cinnamon rolls are just another way to continue to enjoy the deliciousness that is everything eggnog.

We know many people aren’t sure if there are vegan eggnog options, but thankfully there are plenty!

We highly suggest that you make your own. Not only is it easy, but it also tastes the best our of the store bought options in our opinion. Get our easy vegan eggnog recipe!

However, if you would rather use store bought, then we encourage you to check out our vegan eggnog taste test where we try 5 different brands and give you the details on which ones we think are best in order to make your decision.

CAN I PREP THESE VEGAN EGGNOG CINNAMON ROLLS AHEAD?

Unfortunately we don’t have a recommendation at this time to make this flavor gluten free.

If you are looking for a gluten free version, you can get our vegan gluten free cinnamon rolls recipe.

Otherwise, as long as you use a safe dairy free milk, (Oat is our favorite) and a soy free butter (try Earth Balance soy free in the red tub) then you will be all set.

You sure can!  We have dozens of flavors of cinnamon rolls now. We even have savory roll versions if you like things not so sweet.

Or, if you want, to see all our vegan cinnamon roll ideas. 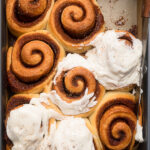 For the Eggnog Filling

For the Vegan Eggnog Glaze

For the Vegan Eggnog Glaze

*See post for notes about Top 8 Allergy Free variation **Nutritional facts are just estimates. Please utilize your own brand nutritional values to double check against our estimates.  **The photos show a frosting but the recipe calls for a glaze.  This is because when tasting, a frosting was too sweet so we updated to just be a glaze.