Gingerbread cookies are a must make for the holidays, but one of the best things is using the same flavor profile to make even more deliciousness. And that is everything what you will get when you make these vegan gingerbread cinnamon rolls.

We pair them with a luscious vegan cinnamon butter cream cheese frosting and whether you serve these for breakfast or dessert they are going to be a holiday favorite.

If you do gingerbread decorating around your house, we have to admit that these would be a wonderful addition to the day. A real treat if you would.

The combination together is a huge win!

CAN I PREP THESE VEGAN GINGERBREAD CINNAMON ROLLS AHEAD?

Otherwise, as long as you use a safe dairy free milk, (Oat is our favorite) and a soy free butter (try Earth Balance soy free in the red tub) then you will be all set.

You sure can!  We have dozens of flavors of cinnamon rolls now. We even have savory roll versions if you like things not so sweet.

Or, if you want, to see all our vegan cinnamon roll ideas. 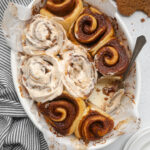 For the Gingerbread Sugar Filling