This vegan cinnamon roll casserole is a delightful spin on traditional cinnamon rolls! Loaded with flavor and perfect for your next special breakfast!

We start with our recipe for amazing vegan cinnamon rolls but then we mix all of that in an incredible vegan french toast batter that you will be shocked doesn’t need any eggs. Do we stop there? No way! We then top it with a crumbly and perfectly sweet vegan streusel topping.

The end result is something that is just so so amazing.

It’s soft with a tad crunch from the topping and so so gooey.

Whether you just want something special for breakfast or you are having guests over for the holidays and want to impress them, both vegans and non-vegans alike will absolutely love this idea.

Can I prep this vegan cinnamon roll casserole ahead?

Yes! Make it all the way through and then let cool completely. Once it is cooled, then you can either cover it in the dish you baked it in or remove to another container. Store in the fridge for up to 5 days.

Can I freeze this vegan cinnamon roll casserole ahead?

You can freeze the casserole after baking it and letting it cool completely.

Store it in a freezer safe container for up to 3 months. To reheat, return to oven at 350 degrees for about 15-20 minutes or until heated throughout.

Do not let it thaw out overnight before reheating.

Can I make this cinnamon roll casserole Top 8 Allergen Free?

At this time, we cannot recommend a gluten free flour to use with our recipe.

We just wanted to share the photos above so that you could see what to expect the mixture to look like before it goes into the oven.

Once the french toast mixture is poured over and combined with the cinnamon rolls dough, it should resemble the photo above and then it’s time to bake after adding the topping!

Can I use store bought cinnamon rolls instead of making?

Absolutely! We do think that our homemade version is fluffier than any store bought version could be, we understand that you may want to get through the recipe faster.

There is a clear cost difference between the two in that store bought vegan cinnamon rolls are usually around $4-5 a canister.

You will likely need 2-3 canisters of vegan cinnamon rolls if you use this method.

If you are looking for even more vegan breakfast ideas, we think you should check out these below. 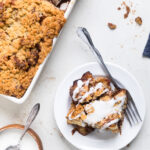 For the Cinnamon Rolls

For the french toast batter

For the Streusel Topping

**Nutritional facts are just estimates. Values do not include optional frosting. Please utilize your own brand nutritional values to double check against our estimates. Optional pecans not included.