This delicious cinnamon vegan star bread is everything that you love about cinnamon rolls in a pull apart, show-stopping version.

The holidays are filled with delicious brunches and special breakfasts. This cinnamon vegan star bread is a definite showstopper to impress people with.

While it looks extremely fancy, it’s not difficult to make. It’s essentially just making vegan cinnamon rolls and then making them into a shape, in this case a beautiful round star shape.

People will tell you it’s too pretty to eat, but trust us, you’ll want to eat this!

Another great thing about this recipe is that is can be prepped ahead and then reheated so you don’t have to worry about being in the kitchen for hours when you are trying to enjoy family or company.

Below are notes about the ingredients before we get into the full recipe located lower in this post on how to make this easy vegan star bread recipe:

CAN I MAKE THIS VEGAN STAR BREAD TOP 8 ALLERGEN FRIENDLY?

There is flour and dairy free butter in this recipe.
For the dairy free butter, you want one that is also soy free.  We prefer Earth Balance soy free in the red tub or Flora!
We don’t have great experience using gluten free flour blends to make yeasted dough, so we don’t have a recommendation for that at this time.

CAN I FREEZE THIS VEGAN BREAD RECIPE?

Yes. Let cool completely (without glaze) and freeze in desired sizes. Store in a freezer safe bag or container. Use within 3 months.

CAN I PREP THIS VEGAN CINNAMON VEGAN STAR BREAD AHEAD?

Yes!  You sure can!   Two options:
1 – Once your bowl is covered to rise for the first time, you can place the bowl in the fridge up to 2 days before you plan to use it (before rising).
Just make the recipe as written, cover and place in fridge until ready to use.  Then pull it out, let it rise until doubled and proceed with the recipe.
2- Make completely and let cool all the way. The store in an air tight container. You can prep it up to 2 days in advance.

What other vegan holiday brunch ideas could I make?

If you love this cinnamon vegan star bread, you will also love these other delicious and fun vegan holiday brunch ideas: 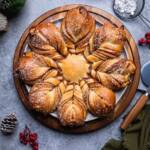