This Whipped Cream Cheese Vegan Stuffed French Toast with Peaches and Blueberries is quite possibly one of the best vegan breakfast ideas (or brunch).

If you are looking for an epic vegan breakfast or brunch idea to impress, then this is it! This Whipped Cream Cheese Vegan Stuffed French Toast with Peaches and Blueberries is not only a stunning show piece, but the taste is out of this world.

We’ll not only go over how to make the absolute best stuffed vegan french toast, but we’ll also give you tips to make a little faster version as well if needed. Either way you will love how amazing this recipe is!

Recipes like this are often served for special occasions like holidays or even back to school breakfast morning; however, we say that it’s good no matter what and you should treat yourself!

Below are notes about the ingredients before we get into the full recipe located lower in this post on how to make this stuffed vegan french toast.

There are two parts to this recipe, the actual french toast and then the whipped cream cheese filling.

For the french toast, you’ll need:

For the french toast, you’ll need:

For the Whipped Cream Cheese:

While we wouldn’t deviate from the cream cheese recipe, you could stuff this with another vegan frosting recipe that we already have on the site.

You may want to make the frosting a little thinner for stuffing purposes.

How do I make the best Vegan Stuffed French Toast?

How do I make this Vegan Stuffed French Toast faster?

The biggest tip that we can give for making this stuffed vegan french toast faster is to make the bread ahead of time. You can also make the filling ahead of time and store it until ready to use. The bread itself can even be frozen and then thawed. Once the bread is made, the rest goes so much faster!

Can I make this Top 9 Free?

The biggest allergens are the wheat in the bread and the tofu. For the tofu, you can easily just follow our banana french toast batter and have an equally amazing recipe! For the wheat, we would suggest finding a softer gluten free bread and trying it with that, but we can’t say that it would work out well.

Can I make this recipe with store bought bread?

We get it, sometimes there’s just not enough time to make a dough from scratch. If you are using a soft store bought bread, let it sit out overnight to get stale. Then make each slice individually. After that, when ready to serve, layer some of the whipped vegan cream cheese filling on one slice, then top it with another slice. You can crimp the edges together if desired, but not necessary.

CAN I PREP THIS VEGAN STUFFED FRENCH TOAST AHEAD?

YES! You have 2 options. Make the entire recipe, let cool completely, then store in an air tight container for 3-5 days. Reheat in the microwave or oven until heated throughout.

The second option is to make the french toast and then store as discussed previously and wait to stuff it until ready to eat. We’d recommend the second option. 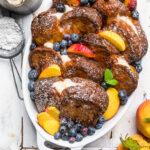 For the Whipped Vegan Cream Cheese

*See post for other bread options **Can also spoon it in, but the piping works easier- use a Ziploc if you don’t have piping bags.