These vegan cinnamon knots with crunchy brown sugar topping are easy to make and only need 9 ingredients, but will wow anyone!

Sometimes you want to wow someone with food, but you also want it to be easy for you! Think things like bundt cakes with their pretty designs. These vegan cinnamon knots with crunchy brown sugar topping are just the thing you are looking for if serving breakfast or brunch.

While these look super fancy or hard to make, the truth is that they are fairly easy and fool proof.

While they would be great for a breakfast or brunch, they could totally double as a dessert too!

Often cinnamon rolls are served for special occasions, like holiday morning breakfasts or brunches. Especially if someone in your family made them homemade.  It was usually a special treat.

However, if you are really looking to wow, then these are a must!

CAN I PREP THESE VEGAN CINNAMON ROLLS KNOTS AHEAD?

There’s a few ingredients in here that we need to look at.

First is the dough that contains wheat. We do have gluten free vegan cinnamon rolls; however, because gluten free dough is completely different than normal dough, we wouldn’t recommend that dough to make these.

When making something gluten free the dough doesn’t bounce back it just smushes; therefore, when trying to twist the knots, it would just be a big mess. Stick to just the cinnamon rolls!

Otherwise, as long as you use a safe dairy free milk, (like we said Oat is our favorite) and butter (we like soy free Earth Balance) then you will be all set for this to be free of seven of the top eight allergens.

What other vegan cinnamon roll type of breakfasts can I make?

If you are looking for other cinnamon roll ideas, we have over 2 dozens more that are amazing. 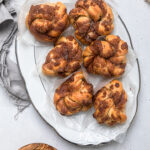 For the outside crunchy topping