These Vegan Vanilla Butter and Chocolate Walnut Cinnamon Rolls in Muffin Tins are such a delicious spin on traditional vegan cinnamon rolls. Made in a muffin tin for the perfect shape.

Cinnamon rolls are known for one of the special breakfast mornings. And these Vegan Vanilla Butter and Chocolate Walnut Cinnamon Rolls take it to the next level.

The combination of vanilla butter and the chocolate walnut filling is unlike anything you’ve ever tried before and you will feel like you were transformed right into your favorite bakery.

All while in the comfort of your own home.

Bonus is that these are made fun by putting them in muffin tins and they get a perfectly circle shape that way.

However, if you enjoy traditional cinnamon rolls in a pan, you can do that as well.

Can I prep these vegan cinnamon rolls ahead?

Do I have to make these in muffin tins?

Proceed with the recipe as direct and instead of putting it into muffin tins, just put them into a greased baking dish.

Can I use pecans instead of walnuts?

Yes! Use the same amount of chopped pecans instead of walnuts and proceed with the recipe as directed.

Unfortunately, at the time, we cannot recommend using a gluten free flour with this recipe.  Please know that we are working on a gluten free dough, but it’s just not quite there yet.

You can omit the walnuts without changing the recipe.

Otherwise, as long as you use a safe dairy free milk, (Oat is our favorite) and soy free butter (try Earth Balance soy free) then you will be all set.

Could I make other things with the dough besides cinnamon rolls?

Can I make other flavors of cinnamon rolls? 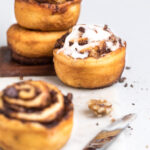 For the Vanilla Butter Filling

For the Chocolate Walnut Filling

For the Glaze Topping

For the Cinnamon Rolls

For the Vegan Glaze