There are two things people wish they could change about making homemade vegan cinnamon rolls.

Working with yeast and the rise time

We completely get it. Yeast can be intimidating, especially if you aren’t use to working with it.

And the rise time. Well, sometimes we just don’t like waiting 2 hours for some homemade cinnamon rolls.

Right now, many of you are also experiencing a shortage of yeast which is another frustration

Have no worries, because we have you covered.

We made delicious no yeast vegan cinnamon rolls that come together in just 45 minutes.

We want to make something clear though, especially, if you have tried one of our other cinnamon rolls that do contain yeast. These are not as fluffy as those, specifically because there is nothing to make them rise and get that fluffy.

Nonetheless, they are delicious and will fill any cinnamon roll craving that you may be having.

What ingredients do I need to make no yeast vegan cinnamon rolls?

There are 3 parts to these yeast free vegan cinnamon rolls. The dough, the filling, and the frosting.

Don’t let this recipe intimidate you. It may seem like a lot while you look at the list, but it’s so easy to make.

full ingredient amounts listed in the printable recipe card below

How do I make no yeast vegan cinnamon rolls?

Add all your dry dough ingredients to a bowl and stir together.

Heat up your dairy free milk and melt your butter. Pour the milk, butter, and apple cider vinegar into the bowl and stir to combine. Do not over mix.

Lightly flour your counter and pour out the dough onto it. Knead the dough and then shape it into a smooth ball. Add more flour on top as needed to prevent sticking.

In a bowl, make the filling by combining brown sugar, sugar, and cinnamon and then stirring in vegan butter and vanilla.

Spread the filling evenly over the dough

On one of the longest sides, rough the dough to the opposite side.

Cut your rolls evenly into 9 pieces, about 1 ½ inches apart

Place rolls in your greased pans and bake for 25-30 minutes or until cooked through. You want to see browning on your rolls.

While the rolls are baking, make your frosting by adding everything to a blender until smooth. If you want it thinner, add 1 tablespoon dairy free milk at a time until desired consistency.

For the dough and filling there is flour, vegan butter and dairy free milk.

For the milk, choose one that works for your allergies, we like oat so that’s usually good for everything.

For the butter, we recommend going with Earth Balance soy free in the red tub if there are soy allergies.

We have found that King Arthur’s Measure for Measure flour works best when switching out a gluten flour.

For the frosting, it is a cashew based frosting so nuts, as well as coconut are a concern. If those are a concern for you, we would recommend just making half the amount of our vegan buttercream frosting and follow the tips about the vegan butter above.

How long are yeast free vegan cinnamon rolls good for?

These yeastless cinnamon rolls would be best stored in an air tight container at which point they would be good for 3-5 days. Warming up being serving is recommended.

Yes, you can either freeze them before baking or after they are done once they had had enough time to cool down (come to room temperature).

Once you try these delicious vegan cinnamon rolls with no yeast, you may be looking for other amazing vegan breakfast ideas that you should try.

Pin these no yeast vegan cinnamon rolls for later: 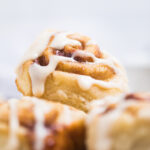 *See post for notes about Top 8 Allergy Free variation. Can replace cashew frosting with vegan buttercream frosting if needed. **Nutritional facts are just estimates. Please utilize your own brand nutritional values to double check against our estimates. Includes using all the frosting which you may not do.