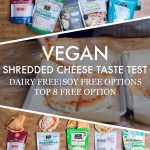 Can you believe that we found 10 different vegan cheeses to do a vegan shredded cheese taste test!?

No?  Neither could we.

I’m not even talking about different kinds with the same brand – like mozzarella, cheddar, etc.  I’m talking that we were able to find 10 different brands that make a vegan mozzarella cheese.

I will admit that we went to 6 different stores to find all of them, but only the best for you guys!

We recently put up a vegan sliced cheese taste test when we made vegan grilled cheese sandwiches and then we got some comments asking us to do this so we happily obliged!

Make sure that you leave a comment below letting us know what other types of taste tests we should do!

We now have a Pt 2 of a vegan shredded cheese taste taste, those results will be at the bottom of this post!

We know that everyone has different taste buds.  What we may think is the best, may completely vary from what you actually like.

You may ultimately think our best is the worst and that’s okay.  We created this video as hopefully a starting point for people and we can only go off our opinion.

What vegan cheese brands did we try?

Despite trying out 10 different brands, we know that there are even more out there.  We just didn’t find them local to us.  The brands that we did find and try are:

I will be upfront that we had tried a few of these before.  Specifically, we had tried both of the Daiya’s, Trader Joe’s, and Aldi’s.  We had tried a different shredded flavor from Violife also.

However, we had never tried any of them side by side with other brands which we believe is really important when it comes to taste testing.

How did we do the vegan shredded cheese taste test?

It was really quite simple.

We made our homemade vegan pizza dough to start.  After our dough was together and had risen, we divided the dough into 4 equal sections to make like a personal pan pizza size instead of 10 whole pizzas.

Next, we added the same sauce to each crust (We love this pizza sauce)and followed that up with a generous handful of each of the vegan cheese brands.

We let them cook roughly 8-10 minutes each (see notes below). Then took out, let cool in order to taste it and compared from there.

Daiya definitely has a presence in the online vegan and dairy free communities.  Its original blend is readily available in most stores and decently priced, making it an easy and usually first choice for many.

However,  the original blend has a strong, almost overpowering taste that many admit to not liking.  While I do think that adding it to pizza tames down that taste a bit it’s still not a favorite for us.

Neither had a big stretch, but the original had more of a stretch than the cutting board blend.

Believe it or not, most commercial restaurants that have a vegan cheese – like Mod Pizza or Blaze Pizza, actually are using this Daiya cutting board blend.

Updated to add:  Most Target’s seem to now have the Daiya cutting board blend (the one we prefer) so if you see it, grab to try!

Good Planet had these super long shreds. Much longer than other brands. This one didn’t melt much at all. Even with an extra 6 minutes in the oven it wasn’t melted much.

We decided to remove after 16 minutes because we didn’t want the crust to burn and not be able to test it.

Despite not melting well, it had a solid taste that we actually liked.

So Delicious also didn’t have pull, but it did melt well.  This one though had a strong coconut smell and taste and we just couldn’t get past that to really like this one at all.

Maybe in a different dish it would have been okay or maybe even a Hawaiian style pizza, but for just plain cheese, it wasn’t it for us.

Aldi and Trader Joe’s are sister companies, both based off of Aldi North and Aldi South that originated in Germany.

The melt on these was INSANE! It had the best melt of any of the brands that we tried.

Interestingly, we actually think these may be the same cheese just packaged differently. Obviously, we have no way to really prove that though.

They smelled and looked the same and felt like a similar texture.  The ingredients on the packages are also very similar.

With both of them, it’s that cheese that sticks to the roof of your mouth.

Both have a sweet smell and taste. Ultimately, we just aren’t huge fans despite a great price point compared to other brands.

Please note: Trader Joe’s has a soy cheese and an almond cheese.  NEITHER of these are dairy free or vegan as they contain lactose/casein. The only vegan shredded cheese at Trader Joe’s is the white packaged labeled Vegan Mozzarella Style Shreds.

Whole Foods 365 blend is the newest brand to the party just launching a few months ago.

It had long shreds similar to the Good Planet brand from above.

It also didn’t melt as well even with extra time in the oven. Even though it says melts & stretches on the package, there wasn’t much of either.

The taste was still good though on this one and we think for the price point, if you are shopping at Whole Foods, definitely pick it up to try yourself.

This brand did melt down really well.

There was a little bit of a stretch on this one but what’s best is that we thought the taste was really great on this one.

Interesting enough, this is the brand that won our grilled cheese taste test so we came in with high hopes even though we’d never tried their shreds.  Luckily, they did not disappoint.

We tried their Aged NutCheese.  It melted really well, but did not have a big stretch like we have been looking for.

We thought since it was described as an aged cheese on the packaged is was going to have a strong flavor profile, similar to how aged cheddars do; however, it did not.

Again, this one melted well, but lacked the stretch.

I was suprised that it actually smelled like a mozzarella cheese. This one  had a great taste on our pizza that was similar to real cheese. We liked this one a lot.

Now, I know what some of you are going to ask next. What about the rest of the Top Allergens. You guys know we love to help, so Let’s get in to it!

All of these are dairy free and vegan already.

Who was the winner?

Okay. I put you through all that just to make you wait until here until I announce the winner.  You know, wait with baited breath, type of thing! HA!

Again, we were pleasantly surprised with all the brands we were able to find and what that means for the future of those of us that are vegan or living a dairy free lifestyle.

Our top 3 brands would be:

Rounding out the top 5 would be Whole Foods 365 brand and Good Planet.

Andrew believed that the parmela creamery should have been in 5th, so maybe consider that one also, especially if you are looking for a very light taste.

We think you will be happy with these brands.

Do you agree with us?  Have you tried any of these ? Tell us below!

Make sure you check out our homemade pizza dough recipe!

Do you have an idea for a future taste test?  Let us know in the comments!

For our second vegan shredded cheese taste test, we decided to do 7 vegan cheese shred brands. We did 5 from the previous video – our Top 4, plus one that reformulated their recipe, along with 2 new vegan shredded cheeses that were not available at the time we did the first test.

For the second taste test, we did:

Aldi’s Earth Grown line is the one that had changed its recipe.

Instead of pizza, we made vegan cheese quesadillas with small tortillas and 1/3 cup of the cheese for each brand.

Our thoughts the second time around:

Our top 3 brands would be:

We switched around the order of the Top 3, but the Top 3 in our first video were still the same in the second.

We liked all the brands for the most part but the Miyokos did come in last. It was also the only one that didn’t even melt at all.

The Chao brand was good but not as good as we anticipated.

And finally, the new and improved Aldi brand, especially being the cheapest price out of all of them, has drastically improved and while not in our, it’s definitely a must try especially if you are a vegan on a budget.

Overall, we are happy with the results and the new products that continue to come out. We think that many people can be happy with what’s coming out on the market and what’s currently available.

Andrew believed that the parmela creamery should have been in 5th, so maybe consider that one also, especially if you are looking for a very light taste.