This Vegan Grilled Mexican Street Corn aka Vegan Elote is one of the absolutely most mouthwatering summer recipes! Easy to make!

If you have never taken the time to make vegan grilled Mexican street corn then you have literally zero idea what you are missing.

We’re asked sometimes where our inspiration comes from and honestly it’s so many places. But this one comes from something similar that we had years ago prior to being vegan and then at a vegan festival a few years ago.

It’s funny because one of our kids was like, “Yup, I want that”. There were so many things available and she was adamant on having the corn. Thankfully, we said yes, because it was delicious and reminded us of the recipe we had pre-vegan.

Wish we could remember the name of the restaurant serving it that day but for now, we’ll just serve you with the best Vegan Elote recipe out there!

WHAT INGREDIENTS DO YOU NEED FOR VEGAN GRILLED MEXICAN STREET CORN?

Below are notes about the ingredients before we get into the full recipe located lower in this post on how to make the best dairy free Mexican street corn:

We highly recommend Just vegan mayo and the Good and Gather vegan mayo from Target. You can read more about these and others in our vegan mayo review.

We highly recommend Wayfare or Follow Your Heart. You can read more about these and others in our vegan sour cream review.

What is Mexican Street Corn?

Mexican Street Corn is the common name for Elote which is a Mexican street food, also known as antojitos. Street vendors sell these fast prepared foods in Mexico which has one of the most vibrant street food cultures in the world.

Elote literally translates to corn and Elotes is just the name for Mexican Street Corn. They are the same thing and interchangeable. Elotes is a grilled (usually) or boiled corn that is topped with a creamy mayo sauce and cotija cheese.

Is this recipe authentic?

We are not Mexican, so we can’t claim that this is an authentic elote recipe. What we can say is that this is inspired by traditional Mexican elote and we think that this tastes delicious and hope you do as well.

Do I have to leave the husks on to cook?

No! They just look pretty when photographing and if you really want to to impress someone. However, it’s not needed. Just remove completely and proceed with the recipe.

If you do want to make them fancy like this, then pull the husk almost all the way back and pull together. Remove the longer piece of husk and then tie around the remaining husk pieces still attached. Remove any silks from the corn.

Do I have to grill this recipe?

No! Grill adds flavor that you can’t get otherwise; however, sometimes elote is also boiled, so you could do that as well and then just put the vegan mayo mix topping on after cooking. We recommend boiling for 5-8 minutes.

Can I make this Vegan Mexican Elote Top 8 Allergen Friendly?

There are top 8 allergen friendly vegan mayo and sour cream options. For the vegan butter, use a soy free version and for the vegan parmesan use a coconut free version. If you make those swaps then this recipe will be Top 8 Free.

How long is Vegan Mexican Street Corn good for?

Vegan Elotes is best served immediately; however, you can store this in an air tight container in the fridge for up for 3 days. Just reheat before eating.

How do you cut corn off the cob?

Place the flat bottom down on your countertop or a flat surface. Then slice from the top to the bottom and turn and repeat.

Fun fact: When Mexican street vendors cut corn off the cob and serve it in a dish it is then called Esquites.

I have leftover Elote sauce, how can I use it?

You can use it as a sauce for burgers, mix it into a pasta salad, add to other roasted veggies like broccoli, or dip in some vegan chicken nuggets. There’s lots of delicious ways to use it.

What do you pair with Vegan Mexican Street Corn?

You can totally just eat this buy itself; however, it pairs well with grilled tofu or jackfruit, seitan and more. Here’s a few ideas:

What other vegan side dish ideas could I make?

We love love love sides. They are the best parts of the meal! Here’s some of our favorite recipes: 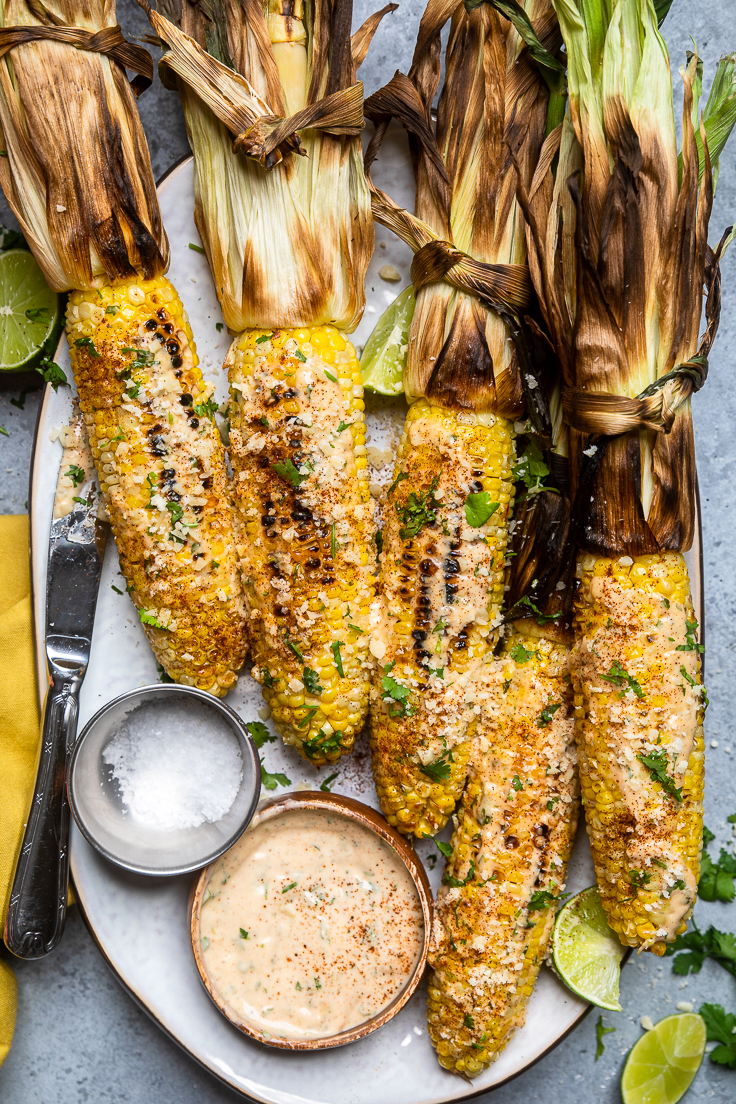