While so many people can’t wait for pumpkin spice lattes, over here, we can’t wait to jump into the kitchen and make these homemade, from scratch, best ever vegan pumpkin cinnamon rolls recipe!

These cinnamon rolls are so soft and fluffy, you’ll want to make this easy recipe again and again!

They are completely eggless and dairy free pumpkin cinnamon rolls so they can be enjoyed by more!

We are not only using pumpkin puree but also pumpkin pie spice directly into the dough so the flavor is kicking up straight from the beginning.

When you pair that will the gooey filling and delicious vegan spiced cream cheese frosting, then you have this winning combo of flavor that makes your mouth do a happy dance!

You can not only prep these cinnamon rolls early by making overnight, but you can even make ahead a few days early which means you aren’t working away in the kitchen all morning!

Above all, we kept this recipe simple and easy so that anyone can make it!

Below are notes about the ingredients before we get into the full recipe located lower in this post on how to make pumpkin cinnamon rolls:

For the rolls and filling

In addition to the above ingredients, for the glaze you’ll need:

We are going to start by making our dough. Into a stand mixer (or large bowl), add in your non-dairy milk, pumpkin puree, maple syrup, melted butter and yeast.

Then, blend until you have a creamy and cohesive mixture.

*Note: You can do this with a whisk, spatula and other large bowl as well.

Next, add in your bread flour, pumpkin pie spice, and salt.

Add your dough hook onto your mixer and let knead for 6-10 minutes until a dough form and becomes smooth.

*Note: If you aren’t using a stand mixture, you’ll want to knead by hand for about 10-12 minutes or until your dough has a smooth texture as well.

Form a circular dough ball, then grease bowl, and place dough ball inside.

Cover with a towel or plastic warp and let rise in a warm, draft free place until doubled in size, about 1 hour.

*Tip: It’s better to watch your dough, not your timer. For each time your dough rises, you are paying attention to how much it has risen, not how much time has elapsed. The time is only a rough estimation.

While your dough is rising, combine the brown sugar and cinnamon together in a small bowl.

When you dough has doubled you’ll want to roll it our onto a well floured surface. into a 14×16″ (36x41cm) rectangle.

Then, carefully spread the softened butter evenly across dough, and sprinkle the cinnamon sugar mixture over the butter.

Carefully roll into a log starting on the smaller side, rolling tightly to make a log and finish with seam side down.

Note: If you wanted to make mini pumpkin cinnamon rolls: Once your dough has risen and you place on a lightly flour surface, cut the dough in half. Then, using one half, make your dough into a 7×24″ rectangle. Use half the butter and cinnamon sugar mixture as instructed above. Then roll tightly, and cut your dough into 20- 1″ pieces. You can pop these into mini muffin tins or still into a casserole dish. Repeat with other half of dough. Proceed with recipe, checking after 12 minutes in the oven.

In a 9×13 pan, lined with parchment paper, place the rolls inside and cover to rise for 30 minutes.

While waiting for this rise time, preheat your oven to 350˚F (177˚C). After 30 minutes uncover the rolls, you want your rolls to have gotten fluffier and be almost completely touching everywhere.

While rolls are cooking, beat together all the glaze ingredients until well combined.

Remove cinnamon rolls from oven when they are deep golden brown on top. While it may be a test of your patience, let cool for 10-15 minutes before adding the glaze.

You cannot make this recipe gluten free at this time. However, you could follow our recipe for gluten free vegan cinnamon rolls.
As far as other top allergens, you’ll want to make sure that you use a non-dairy milk, butter, and cream cheese that are safe for your allergens.

Can I prep this dish ahead of time?

Yes. You can make this recipe 2-3 days in advance and store in the fridge.
Alternatively, you can make the dough and instead of allowing to sit on the counter to rise, cover with plastic wrap and place in the fridge for up to 2 days. Then remove and proceed with the recipe.
One final option is to make the recipe until the rolls are just placed in the baking dish, then cover with plastic wrap and place in fridge overnight. The next morning, let come to room temperature and rise, then place in oven.

Can I double this recipe?

Yes. Double all the ingredients as instructed. When you have your dough formed together, cut it in half and shape into a ball. Place each ball in a separate greased bowl. Proceed with the recipe, doubling the filling and glaze as well.

Can this be frozen?

Yes. Let cinnamon rolls cool completely and then stored in a freezer safe container or bag. Let thaw at room temperature or in the fridge overnight.

How should I reheat cinnamon rolls?

The fastest way would be to warm in the microwave for 25-45 seconds.
If you don’t use or don’t have a microwave, then into a toaster oven or conventional oven at 350F for 7-8 minutes or until heated through works best.

Can I make cinnamon rolls without a stand mixer?

Yes! You can do everything with a spatula or whisk to start. The hardest part will be forming and kneading the dough together by hand which may take you some time. You will want to knead for about 10-12 minutes by hand or until a soft, even dough forms that lightly springs back when touched.

What other vegan cinnamon rolls ideas could I make?

If you love cinnamon rolls, you are going to want to miss all our flavors. We currently have more than 30 different sweet and savory vegan roll ideas!

Get all our vegan cinnamon roll ideas!

Also, if you are looking for even more pumpkin inspiration, then you definitely don’t want to miss our vegan pumpkin recipes! 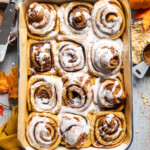 *See post for notes about Top 8 Allergy Free variation **Nutritional facts are just estimates. Please utilize your own brand nutritional values to double check against our estimates.  Cutting Tip: Making small dents on the dough prior to cutting will help with evenness.  Mini pumpkin cinnamon rolls: Once your dough has risen and you place on a lightly flour surface, cut the dough in half. Then, using one half, make your dough into a 7×24″ rectangle. Use half the butter and cinnamon sugar mixture as instructed above. Then roll tightly, and cut your dough into 20- 1″ pieces. You can pop these into mini muffin tins or still into a casserole dish. Repeat with other half of dough. Proceed with recipe, checking after 12 minutes in the oven.