We truly hope that you love the recipe.

Gluten free foods tend to be grainier than their gluten counterparts and that texture has thrown us off for a long time.

We think what we have done is given you the best texture that we can with the knowledge that we currently have without making you wait weeks and weeks for another recipe.

The end result was a super fluffy, super soft gluten free vegan cinnamon roll that actually rose to double in size and cooked perfectly. We think you’ll be happy with the results.

With the omission of the gluten, it’s so easy to make these Top 8 Allergen Free.

You simply need to use whatever dairy free milk is safe for you (any dairy free milk will work) and then use a soy free vegan butter alternative. Our go to is the Soy Free Earth Balance that comes in a red tub.

Quick tip: Double check the gluten free flour blend that you purchase. Make sure that it does not include milk inside the ingredient list as some do.

Can gluten free vegan pumpkin cinnamon rolls be prepped ahead?

Yes! You can make the recipe as directed and then let cool completely.

Then, either cover the baking dish with foil or plastic wrap, or move them to an air tight container and place in the fridge for up to 5 days.

To reheat, just microwave for 30-40 seconds.

What is the best type of gluten free flour blend to use?

We tried this recipe with both the King Arthur Measure for Measure blend and the Bob’s Red Mill 1:1 blend.

We did find that personally we liked the texture better with the King Arthur version, but both recipes did come out.

It is important to note that if you do try another blend to make sure that it has xanthan gum inside the ingredient list. If it does not, then add 1 1/2 tsp to your recipe in the dry ingredients.

We have not tried this recipe with any other gluten free blends, so we can not comment on the success of any other blend. We do recommend from our experience to use a higher quality, more popular blend that has been proven successful like the two we tested.

The apple cider vinegar helps to activate the yeast, especially in a gluten free recipe.

Note: It is normal in gluten free baking for the rolls to have some cracks in them as they rise.

We just wanted to quickly point out some other tips from our experience in making these:

Can I make your other vegan cinnamon roll recipes with this dough?

If you’ve been following us for awhile, then you know that we have a ton of other vegan cinnamon roll recipes.

Since this is a pumpkin dough, you likely don’t want to use it for everything; however, you can use our original gluten free vegan cinnamon roll recipe for other flavors

We are happy to say that you should be able to use any of the normal recipes with this dough, just swapping out the filling for whichever recipe you want to make.

We hopefully will have a gluten free chocolate version soon.

Get all the ideas here. 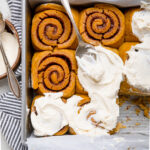 Print Recipe
No ratings yet

*Please read through the post for helpful tips.  **Nutritional facts are just estimates. Values do not include optional frosting. Please utilize your own brand nutritional values to double check against our estimates.