These peaches and cream vegan cinnamon rolls are an absolutely delicious way to enjoy in season peaches. Super soft, gooey, and topped with a vegan cream glaze for an amazing summer spin on traditional cinnamon rolls.

Fresh peaches are a summer delicacy. They are sweet and juicy and just perfect when in season. These peaches and cream vegan cinnamon rolls are going to be your new favorite peach recipe.

The best way to eat peaches in season are straight off the tree. They are so juicy that it’s dripping down your arms and you are hunched over trying to keep it from dripping all over your clothes.

The second best way to eat peaches in seasons is in any type of dessert and there are so many options.

These cinnamon rolls can be dessert or breakfast and you are going to be thanking yourself immensely when you make them.

CAN I PREP THESE PEACHES AND CREAM VEGAN CINNAMON ROLLS AHEAD?

Unfortunately, at the time, we cannot recommend using a gluten free flour with this recipe.  Please know that we are working on a gluten free dough, but it’s just not quite there yet.

COULD I MAKE OTHER THINGS WITH THE DOUGH BESIDES CINNAMON ROLLS?

You sure can!  Replace the same amount of raspberries with other flavors like blueberries or blackberries.  We’ll create other flavors in the future.

If you are also looking for other cinnamon roll ideas, we have a few more that don’t use this everything dough, but are still amazing.

Pin these peaches and cream vegan cinnamon rolls for later: 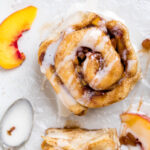