These vegan southwest egg rolls are perfect for appetizers or a meal and can be customized for ingredients you have on hand. Pair it with vegan nacho cheese for a delicious combo!

It would be awesome if there were versions at the restaurant that were vegan; however, whenever we crave something that we can no longer eat, we just make a vegan version.

These vegan southwest egg rolls are easy to make and perfect for whether you want them for an appetizer, lunch, or a dinner meal.

What ingredients do I need to make vegan southwest egg rolls?

Full ingredient amounts listed below in the printable recipe card

The ingredients that may contain allergens are the vegan chicken, vegan cheese, and vegan egg roll wrappers.

Make sure that you choose a vegan cheese that is suitable to your allergens. Take a look at some of our favorite vegan cheeses and what allergens they have.

As far as the vegan chicken, it usually has soy and/or wheat. You could swap with walnut taco meat if not nut allergies or honestly just omit all together.

How long are vegan southwest egg rolls good for?

They will last for 3-5 days in the fridge in an air tight container. However, they will not be as crispy. You can heat them up in the oven to bring back some of the crispiness.

Yes. After you make the mixture, let it cool completely and then make all your eggrolls. Place them on a baking sheet and flash freeze for 15 minutes.

Then, you can put then in an air tight container or freezer bag for up to 3 months.

WHAT ARE OTHER VEGAN DINNER IDEAS I SHOULD TRY?

First, if you like eggrolls, make sure to try out our easy vegan egg rolls and a must try, our 2 ingredient vegan apple pie eggrolls.

But, you may be wondering what other delicious vegan meal ideas you should try.  We’ve rounded up a few that we love ourselves and think you will too! 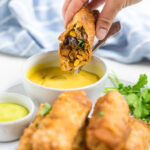