Learn how to make vegan marshmallow fluff right at home! Perfect on a wide range of desserts like pie, ice cream, or s’mores.  This recipe is Top 8 allergen free marshmallow fluff. Just 5 ingredients and one bowl!

If you have ever had marshmallow fluff before, you have likely dipped a big spoon full of it straight into your mouth.  You may or may not have promptly been yelled at for doing so. And I may or may not be writing from experience.  However, if you’ve gone vegan/plant based or have food allergies, and still wish you could make recipes with it.  Luckily, we’re showing you how to make a delicious vegan marshmallow fluff recipe.

What ingredients do you need to make vegan marshmallow fluff?

Not only is this a Top 8 Allergen Free recipe, but you only need 5 ingredients to make this vegan marshmallow fluff.  The ingredients that you need are:

Aquafaba is a recently new discovery. Only within the last 5 years have people started using aquafaba.  So what is it exactly? Aquafaba is the cooking liquid from certain beans or legumes, such as white beans and chickpeas that has been whipped to resemble egg whites.

The easiest way to get aquafaba is to use the juice from a can of chickpeas. You could also make it yourself by making a pot of dried garbanzo beans and then after cooking the beans, continue cooking until liquid is reduced in half.  Cooking the later way isn’t as easy because you have to make sure the consistency is the same as it would be from a can.

Contrary to what you may be thinking, it actually has a very neutral taste and, when whipped, goes from tannish in color to completely white.

How do you make vegan marshmallow fluff?

This vegan marshmallow fluff is insanely to make.  In a bowl, combine the aquafaba juice with the vanilla and cream of tartar.  Beat with a stand mixer or hand mixer until it resembles stiff peaks.  If you turn the bowl upside down, it shouldn’t go anywhere.  This takes approximately 8-10 minutes.

Once that happens, add in both sugars and beat again until dissolved.  The end product should have a glossy finish.  That’s it!  That’s all you have to do to make this vegan marshmallow fluff.  You really can’t get any easier than 5 ingredients, one bowl, and under 15 minutes!

It can even be toasted with a torch just like marshmallows!

What recipes can you make with vegan marshmallow fluff? 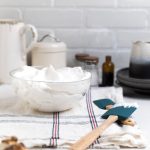 **Nutritional facts are just estimates. Please utilize your own brand nutritional values to double check against our estimates.