Elderberries are one of the most used medicinal plants in the world. Now you can make a homemade vegan elderberry syrup easily.

This homemade vegan elderberry syrup recipe will teach how you how to make this popular cold and flu season remedy in the comfort of your own home.

Elderberries have been used for centuries as an immune booster and for other medicinal properties; however, it has just become mainstream in recent years.

You can now easily find over-the-counter pre-made elderberry syrup at many large grocery and general merchandise stores as well as pharmacies.

However, the problem with those over-the-counter versions is that they traditionally use honey. Honey has been used for a long time for its healing properties as well; however, it’s not suitable for a vegan diet and because of that we wanted to create a version that was suitable for vegans.

Many recipes on the internet say to use maple syrup or coconut sugar; however, coconut sugar is not a healthy alternative to honey as it doesn’t yield enough benefits for the high sugar content.

Maple syrup does have health benefits if you can find a true pure maple syrup, but that’s not easy to find and can be cost prohibitive.

So we can to the conclusion that homemade date syrup would be our best bet.

Elderberries are small dark purple berries that grow on bushes around the world. The Sambucus nigra version is the most commonly elderberry used in making elderberry syrup.

In native and folk medicine, elderberry is considered one of the most healing plants in the world. In fact, it’s been references as far back at 400BC and Hippocrates called it his “medicine chest”.

What are the health benefits of elderberry syrup?

Elderberries, according to WedMD, are packed with antioxidants and vitamins that have immune boosting properties. They have been shown to reduce inflammation and stress as well as being heart healthy.

However, during cold and flu season, they have also been shown to prevent and/or ease the symptoms that are caused by those illnesses.

According to Healthline, a stidy of people who took 15ml of elderberry syrup 4 times per day showed improvement in flu symptoms in two to four days as comapred to seven to eight days in the group that did not receive the syrup.

Other studies have also shown reduced symptoms of both cold and flu illnesses.

Are there any health risks in taking eldeberry syrup?

Before you take any type of medicine, natural or otherwise, it’s always best to speak to a medical professional and we’d recommend that you do that here as well.

Unripe elderberries contain lectins, which can cause stomach problems if too much is eaten.

Healthline also states that 3mg of cyanide are in every 100 grams of fresh, uncooked berries, which is only 3% of the estimated fatal dose for a 130lb person; however, it’s still noted. Cooked versions do not contain cyanide.

Why make your own?

Sure, there are many varieties now available over-the-counter; however, not only are they not cost efficient (making at home is cheaper), but many include honey which is not suitable for vegans.

Can I use fresh or frozen elderberries?

Yes. If you have access to fresh or frozen elderberries, we just recommend that you double the amount called for in the recipe beow.

How much should I take?

This is a question that you should really discuss with an herbalist or naturopath.

Personally we take 1 tablespoon daily as adults, and 1 teaspoon to our children during cold and flu season. During times where we feel like or know our family is getting sick, we will double or triple this amount during those days.

Where do I order elderberries from?

You can order dried elderberries in bulk from many online retailers.

A normal price is to pay $23-24 per pound, unless you can purchase enough in bulk for a wholesale price which could reduce the cost.

Can I reuse the elderberries?

You could reuse the remaining berries after cooking to make a tea; otherwise, we recommend putting them in your compost.

This recipe is already Top 8 Free as written. There is no need to change anything.

How long is vegan elderberry syrup good for?

If this recipe is properly made and stored, it will last 3-6 months in the fridge. However, it’s best to be used within the first 4 weeks and then make another batch.

Yes. Any amount that you don’t think you can use in the time frame can be frozen in a freezer safe container or bag. Alternatively, you can freeze in ice cube trays as well.

Can I reduce the amount that is made?

This recipe makes approximately 1 quart of vegan elderberry syrup, which can be a lot, especially if only 1 person is taking it.

If you need to, you can reduce the recipe in half so you are only making approximately 2 cups of the mixture.

Can I use store bought date syrup?

We recommend making the date syrup listed below instead of buying pre-made date syrup.

Date syrup that you buy pre-made often has additives and other ingredients. We want the whole form date syrup as possible. 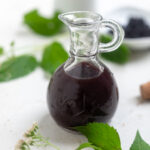 Elderberries are one of the most used medicinal plants in the world and now you can make a homemade vegan elderberry syrup easily.
Prep Time5 mins
Cook Time1 hr
Author: LarishaBernard

For the Date Syrup

*Please read through the post for more information.  Not to be used as medical advice. Please speak to a doctor before consuming. *You can purchase dried elderberries here.  Recipe adapted from Wellness Mama.

This post is for educational purposes only and is is not personal medical advice. We recommend speaking with a medical professional before consuming.