Vegan hocus pocus buns or vegan marshmallow stuffed crescents are one of the quickest and easiest treats that you can make! Give them a try today!

We are absolutely similar to small children around here in the sense that if we see something that looks really cool, we want to try it. If you are here and reading this, then you likely too are just like us.

Last week, we saw a viral post going around about hocus pocus buns. It’s where you wrap crescent dough around a marshmallow that has been dipped in cinnamon sugar. Then, bake it.

From our research the recipe was originally published here.

The idea is that when you bake the recipe, the marshmallow will disappear and Hocus Pocus! Ta Da!

It’s a fun activity for kids especially. But will it work when vegan?

What ingredients do I need?

You only need 5 ingredients, making this a super easy vegan dessert idea.

The ingredients that you need are:

Where can I find vegan marshmallows?

Vegans cannot eat typical marshmallows because they are made with gelatin which comes from boiling animals parts.

Read about surprising foods you think are vegan but they aren’t.

Some stores that readily carry the Dandies brand of vegan marshmallows are:

Many other natural and local grocery stores may also be carrying it. If you have a hard time finding it in your area you can also order vegan marshmallows online.

Seasonally, Trader Joe’s gets in marshmallows. If you ever see marshmallows there, they are also vegan which is what we used for the recipe here today.

What are vegan friendly crescent rolls?

Surprisingly the Pillsbury and other store brand crescent rolls are what we call accidentally vegan. They are items that don’t knowingly contain any animal products.

Many people assume that crescent rolls and other canned refrigerated biscuits contain butter (milk) but most actually don’t.

What happened when we tried to make them vegan?

The vegan marshmallows definitely melted; however, they didn’t disappear. We assume this is because the gelatin dissolves in traditional marshmallows but when using tapioca starch as a replacement it just doesn’t work the same.

Nonetheless, the was one of the easiest and tastiest simple vegan desserts that we tried and we’d recommend you making them 10/10. 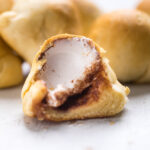